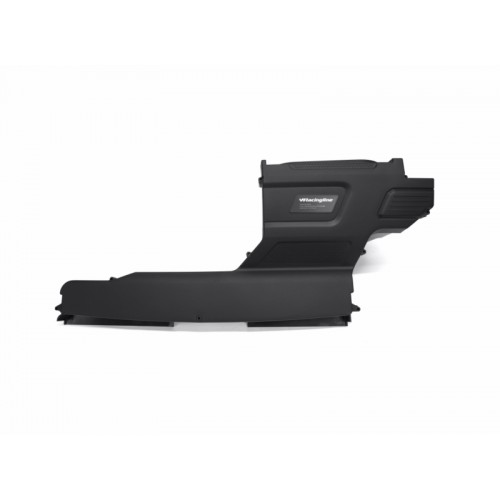 Welcome to the R600 intake.  We believe that this is the world’s most sophisticated intake for MQB-platform EA888 cars.

Functionally, a vastly-enlarged airbox houses a giant TriFoam™ triple-layer filter.  Using twin front air intakes, from both sides of the front panel, this rates the intake up to 600bhp through the very significantly improved mass airflow through to the turbo. Appearance-wise, the airbox is manufactured in the UK from the same PU material as the original factory airbox, matched in to the same finish and appearance as the engine cover.

This attention to detail extends to all the fittings, which use the factory mounting methods ensuring simple and reliable fitment, with nice details such as the drain plug connection, and for the US market, attachments for the Secondary Air Injection (SAI) pipe. All to assure you of the same levels of quality and durability as a factory part.

The R600 Intake System comes with an oversized domed High-Flow TriFoam™ air filter designed to provide increased surface area and dust capacity. This extra surface area provides even more airflow with lower restriction, to ensure that the largest volumes of the coolest possible air is available to the engine at all times. With the filter rated to 600bhp, this gives great ‘headroom’ for any future upgrades you may have planned, and ensures that the intake system is operating comfortably within its capacity at all times.  This maximises efficiency and improves drivability and torque throughout the rev range – turbocharger spool dropped nearly 500 RPMs, reducing turbo lag and creating faster turbo response.

Expect greater horsepower and torque above 4,500rpm with a more direct and responsive feel under throttle.  As shown in the illustrative power and torque curves above (this particular test performed on a Golf 7R stage 1), it is the ‘area under the curve’ difference from factory that you will really feel, as the engine is freed to breathe with less restriction as revs increase.

Of course, air intake temperature plays a major role in engine performance, especially on turbocharged engines, and this is another major improvement of the R600 versus the standard airbox.  In an effort to maintain the lowest possible temperatures, the R600 Intake system draws cool fresh air from not one but two intakes across the front of the car through to the giant, sealed airbox.  The PU material that the air box itself is constructed from (the same as the original factory part) provides significant heat insulative properties, helping to prevent heat soak into the intake airflow.

The R600 has been extensively tested on different cars around the world, and as you would expect no expense has been spared during the research and development process.  Pulling together the best motorsport CFD designers to develop the optimum flow patterns, and CAD designers to package the intake precisely into the engine bay, together with the styling determined by an OEM designer all adds up to why we are so confident of the abilities of the new R600.

The R600 engineering team’s overall brief has been focused on optimising the pressure ratio between the inlet and outlet through maximizing filter efficiency. Hence the final specification of greatly increased airbox volume, the twin front-panel intake design and the more than doubling of filter surface area.Our development has shown that a high-flow intake system on the Golf 7 / MQB EA888 engines really only gives worthwhile gains once power outputs reach over 300bhp – up to that level, the original factory intake is satisfactory, especially when combined with a High Flow Panel Filter.   So to really get the most from the R600 intake, its fitment should be combined with a reputable ECU upgrade.Our testing programme has been conducted around the world on the R600 Intake. We have used Golf 7R, Golf 7 GTI and Audi S3 models, and each has given very worthwhile gains as the standard air box and filter reaches and exceeds its airflow capacity.

The R600 domed intake filter unit itself is constructed from a TriFoam™ triple-layer laminate of open-cell polyurethane foam, which gives an exceptionally high level of filtration to protect the engine from contaminants in the air down to well below 5 microns, whilst not greatly restricting airflow.

This exact same filter material has been used by F1 teams around the world due to its excellent filtration and airflow properties. In our experience, cheaper (and single-layer) foam filter materials are simply unable to deliver the same flow and filtration meaning a potentially very risky compromise for your engine.

The R600 intake system delivers a rich induction noise as soon as you first accelerate hard.  With the increased airflow from this system, you will also not miss the sound of the diverter valve opening when you lift between gears.   However volume levels are well-contained, and the sound quality is music to the ears of any enthusiastic driver!

*This part has been discontinued to new partnumber VWR1200R601E*

This product is compatible with the following vehicles

RacingLine Group is based in Milton Keynes, United Kingdom. We are a tier-1 partner to Volkswagen Group, and to many we are best known for delivering the Volkswagen Racing motorsport programme ever since 1997, out of which was born our increasingly popular Motorsport & Performance Parts range, now sold all over the world. Alongside that is our successful Events division, and our other Motorsport and Automotive Services.  But above all, we are passionate about our Volkswagen Group products, and passionate about making them go better and faster!

This is an VWR R600 Replacement Intake Air Filter fitting only the Racingline R600 intake. TRIFOAM® ..

PRECISION ENGINEERED FOR PERFECT PERFORMANCE.-Simply slides over the top of your Cotton R600 filter-..

SIMPLY  THE BEST. The RacingLine R601 Intake is the world's most sophisticated and best-se..